What is Trans AR?

Public transportation in Vancouver is an area that is going to see large growth over the next decade. Over the past twenty years, there has been an increase of around 800,000 people who use TransLink’s services and metro Vancouver is the fastest growing in terms of ridership numbers in Canada and the United States (source). Furthermore, the number of licensed drivers as a percentage of age group has been decreasing, showing that private car ownership has decreased (source). While there has been a large growth in demand for public transport in metro Vancouver, transportation is the second largest pain point in Vancouver, with over 85% of people agreeing that they would not accept a job due to an inconvenient commute (source). Moreover, 50% of commuters in Vancouver agree that public transportation services have worsened over the past half-decade, with 90% of people wanting an improvement in bus services (source). 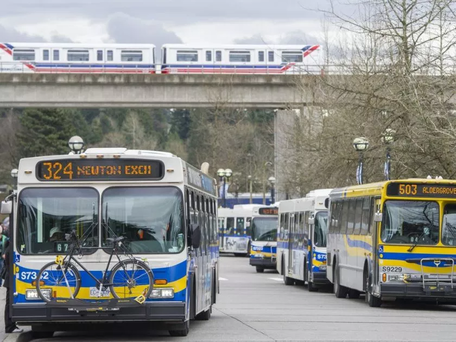 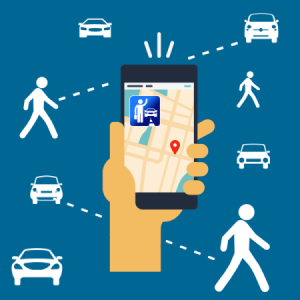 Development of Transit Mobile Applications
​
To match the increase in demand for public transit, there has been growth in Transportation-as-a-Service (TaaS) development. It looks to integrate multiple sources of transportation including public transit, ride sharing services like Modo, and bikeshare services like Mobi in a single application to create an application that provides the fastest and most cost-efficient journey for the customer. People who use TaaS are expected to save around $3000 a year, and that number will only grow as financial incentives to use public transport increase (source). In addition to integrating multiple sources of data, applications today need to be user friendly and innovate.

What is Augmented Reality 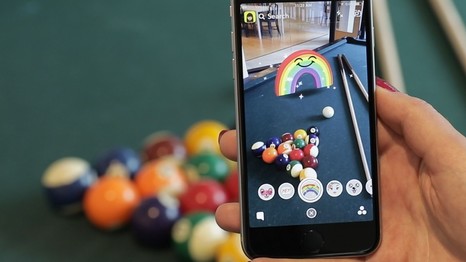 ​Augmented Reality (AR) is technology that allows users to add digital layers of information and data on top of the physical world. AR appears directly on top of an existing environment and adds unique digital effects like images or sounds to create an engaging experience.

AR starts with the user’s camera and takes the live image from it identify and classify certain scenes and objects. Once it has done that, its retrieves information from the context while rendering 3D graphics to overlay on the screen. In the end, all those points of data are used together to provide an accurate model of the graphics and physical world onto the users display.

As of now, nearly 50% of smartphone users are ‘familiar with’ AR technology, meaning there is a high potential to capture the market (source). Currently, businesses are exploring AR across multiple industries including education, industrial manufacturing, gaming, and in the case of App-Scoop, physical world mapping. AR is expected to be a $50 billion industry by 2025 and approximately $3 billion of that will be towards applications like TransAR (source).

Benefits of Augmented Reality in Transit
Augmented Reality (AR) is helping apps become disruptive by leveraging smartphone technology to create unique user experiences that solve multiple pain points. AT&T see’s the user of AR in smart city mobile applications as an area with large potential to change preferences and increase the use of public transit (source).

Marker-less recognition allows users to identify key points of interest using their smart phone camera with high accuracy. This identification makes the user experience immersive and dynamic as they can move their camera around to physically locate buses and stops in real time.

TransAR Application
Here at App-Scoop, we have used TransLink’s open API and innovative technology to create a mobile transit application called TransAR that leverages AR to improve user experience by having accurate bus and stop locations and information.

For people who are using transit in an unfamiliar location, the use of TransAR makes finding information regarding buses and stops even easier than current transit applications.’

Stop Identification
All users need to do is identify the bus stop they want to find, open AR view, and follow the on-screen icon to reach their stop.

Users can also tap on a stop to find out key points of data including: the bus arriving there, the time of arrival, and distance from user’s current location.

This is better than a 2D map as the user’s current location is often inaccurate by a few meters, and this can confuse users. The inaccuracy can confuse users in terms of which side of the road they need to wait on. 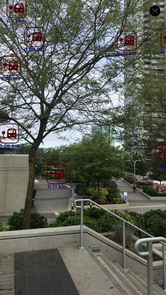 ​
Furthermore, if they are at a location with many bus stops, like a bus-loop or Skytrain station, the stop identifier will let them know where they need to go in a matter of seconds.

This helps provide a better user experience as people who have issues finding a stop will end up having to walk and search less for a stop, especially if it’s their first time at that location (for tourists). 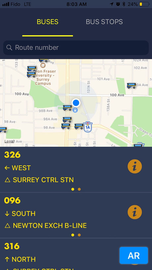 ​Bus Locations
One of the largest pain points of transit users today is inaccurate bus information. According to Forbes, wrong real-time bus information is one of the main reasons people do not use public transit. People miss buses as they arrive early or late, and are uniformed of this change in arrival time, which makes the bus system unreliable.

TransAR solved this issue by finding an innovative way to use TransLink’s data to provide accurate bus locations with only a two-second margin of error. Now, users have a more accurate picture of where buses are and are less prone to miss one due to a difference in timing.

Moreover, users can select the bus they would like to track and open the AR view. This will allow them to see real time location of the bus and get an estimated arrival time to their stop. Users can also tap on a particular bus to see where its last stop was, and what time it arrived there.

These features help reduce the inaccuracy of information, and keep the user informed, improving their user experience.


​
​
Conclusion
AR technology is going to revolutionize how we use public transportation. The demand for bus services is only increasing, and mobile apps need to adapt to the trends taking place in the industry to solve the main pain points users are facing which are issues finding stops and inaccurate real time information. TransAR solves these issues while still providing the users with an easy to use app, making it a one of a kind application for public transit users in Vancouver.
Download the application on iOS now!